A new trick in the Arduino IDE 1.8.9 makes writing NoCAN sketches even easier than before.

When you write a sketch in the Arduino IDE and you want to upload it to one of the CANZERO nodes in your NoCAN IoT network, you typically go through these steps:

This is not very hard, but it's still not as easy as programming a classic Arduino UNO where you just click on the "Upload" icon after configuring the correct "Port" in the IDE.

Well, thanks to a recently added feature in the Arduino IDE 1.8.9 you can now do the same "Click to upload" for the NoCAN platform!

Configuring the Arduino IDE for NoCAN

You will need to install the latest Arduino IDE (version 1.8.9 or above).

Get the latest version of the Omzlo NoCAN boards (version 0.3.0) in the Arduino IDE:

If you have a Windows machine, edit or create the file named _nocanc.conf that will be placed in your user directory,e.g.:

On a Linux or MacOS machine, edit or create the file named .nocanc.conf in your home directory, e.g.:

This file should have content similar to the following example:

Of course, you need to replace 192.168.2.112 with the address of your Raspberry Pi running the nocand server. You will also need to replace yoursupersecretpassword with the password you configured for nocand (see the tutorial for more info).

After these steps, restart the Arduino IDE and navigate to Tools > Port. A subsection of the menu should show all the connected NoCAN nodes under the title "NoCAN nodes". 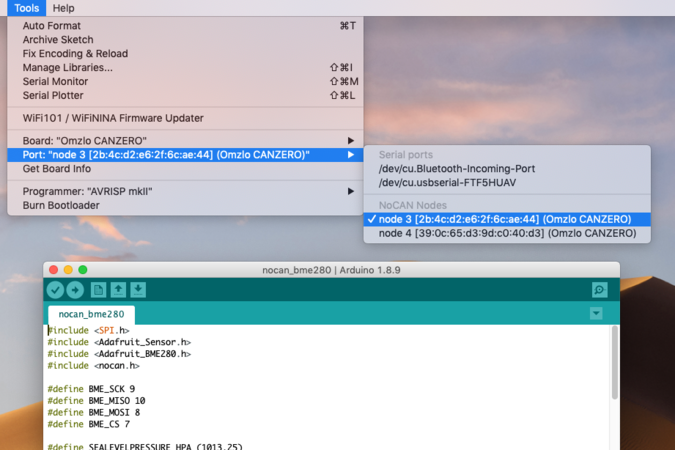 Congratulations, you can now upload your sketches directly from the Arduino IDE! Cool right!

If it doesn't work double check your configuration files and make sure the nocand server is running on your Raspberry Pi.

Uploading from the Arduino IDE was made possible by the introduction of a "Discovery" feature in the Arduino IDE 1.8.9. This feature is however still a bit buggy and will likely evolve in the next releases of the Arduino IDE. If you find bugs or have issues with this new feature, come and discuss them in our forums.

Update: check out our more detailed technical write-up of this new feature on our blog.

1 comment triggered our SPAM filter and will be reviewed before publication.