The Omzlo platform can take you to places that Wifi can't reach.

The Omzlo platform uses a protocol that is based on CAN-bus in order to create an IoT network of connected Arduino-compatible boards such as the SKWARE or its ancestor the Omzlo One.

This protocol, which is called "Nocan", enables a lot of interesting features such as:

The specifications are open source and available at http://omzlo.com/articles/nocan.

The platform currently runs CAN-bus at 125Kbps, which in theory enables communications over up to 400 meters (~1300 feet), according to the formula found in this application report from TI. This seems like a comfortable limit for our applications. In preparation for our Kickstarter, we had successfully tested communications over almost 100 meters (~330 feet). But can we do more?

Before testing the full cable we took a quick look at oscilloscope traces on our lab desk, where cables between the controller and the nodes are 10 cm long jumper cables (We didn't even bother adding a 120-ohm termination resistor on the CAN bus as normally recommended).

The screenshot below shows a CAN-bus capture on the oscilloscope. With our cheap Chinese power supply set to 12v, we measured an actual 11.94V DC power throughout the network.

Communicating over a 305 meters cable.

We then swapped our 10cm jumpers for 305 meters (1000 feet) of UTP cable. These UTP cables are composed of 8 conductors forming 4 twisted pairs. As noted here, we use 3 conductors for DC power, 3 conductors for ground and the remaining 2 for the CAN bus differential signal.

We used an Omzlo One node mounted with an LCD shield and used our web interface to send messages to the node, which then printed them on the LCD, as shown below. 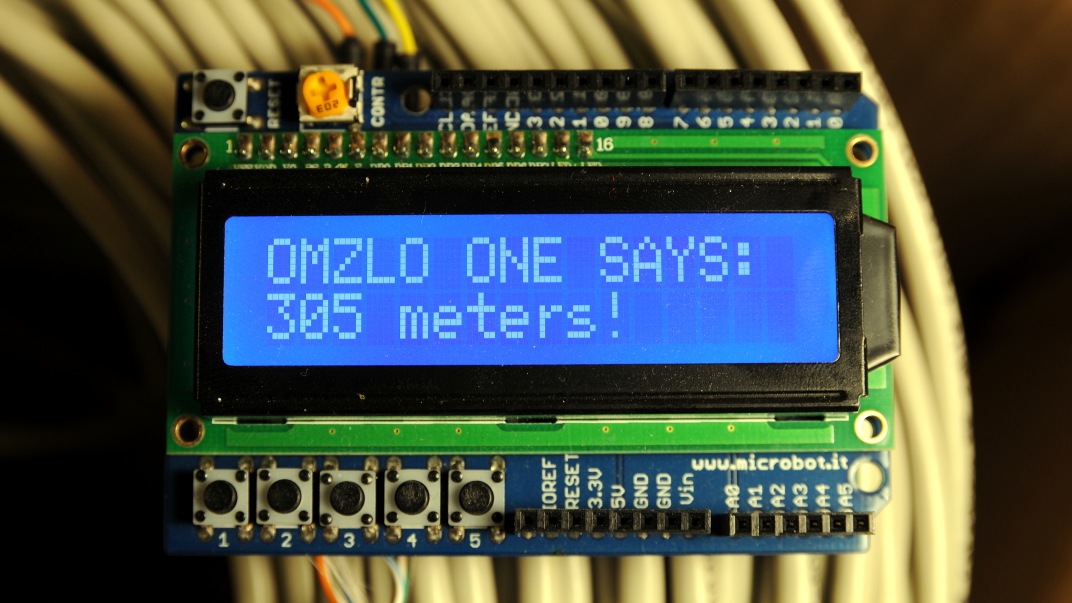 The screenshot below shows a CAN-bus capture with the oscilloscope placed on the node. The results are rather clean, with a weaker signal amplitude.

Well, the theory seems correct: our protocol works over 300 meters without any issue.

One of the key motivation of the Omzlo project is to create an IoT network with a single cable that brings both power and networking. It aims to offer an alternative solution in cases you don't want to use WiFi because of signal reach issues or because you don't want to swap batteries on your sensors every few days...

We will soon show you our new controller which is a cool Raspberry Pi hat! To keep being updated about this project, follow us on twitter or on our facebook page.

9 comments triggered our SPAM filter and will be reviewed before publication.