The Omzlo platform is at Maker Faire Rome 2017

Note: This article refers to a prototype. The final product is described here.

I'm showcasing the latest prototype of the Omzlo platform at Maker Faire Rome 2017, next to the Arrow booth and the Arduino booth!

Today, when building IoT network, many of us rely on WiFi or Bluetooth. But such wireless solutions are not adequate for all applications: the signal does not always reach where it's needed, and you may find yourself running into power issues (e.g., changing batteries all the time). You may realize that a "wired" solution is a better approach.

The Omzlo platform offers an easy way for makers to build an Arduino-compatible "wired" IoT network for their home and garden, using just a simple cable that provides CANbus networking and DC power.

An Omlzo network is composed of one or more nodes connected to a node manager, forming a chain. Each node is an Arduino-compatible device called "CANZero," which can be programmed using the familiar Arduino IDE and libraries. The node manager is composed of a Raspberry-Pi connected with a HAT (i.e., a shield) called the "PiMaster," which provides a web interface that enables users to manage their network. The following drawing illustrates the topology of this network. Users can write code and then upload the result to any CANZero node in the network through the web-interface provided by the "PiMaster" controller. As a consequence, there is no need for physical access to the node to program it. In fact, the nodes can be far away from the controller: we have tested the network over distances of 300 meters without any issue.

The CANZero node is an Arduino-compatible board with similar characteristics to the Arduino Zero, with the addition of unique features necessary for networking. It notably features:

The diagram below gives a simplified overview of the pinout of the CANZero. 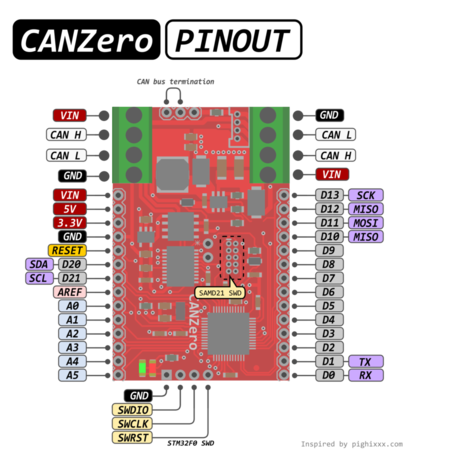 Measuring 3.3cm by 5cm (1.3" by 2"), the CANZero is smaller than the classic Arduino and can fit in an electric junction box if necessary, as shown in the picture below. 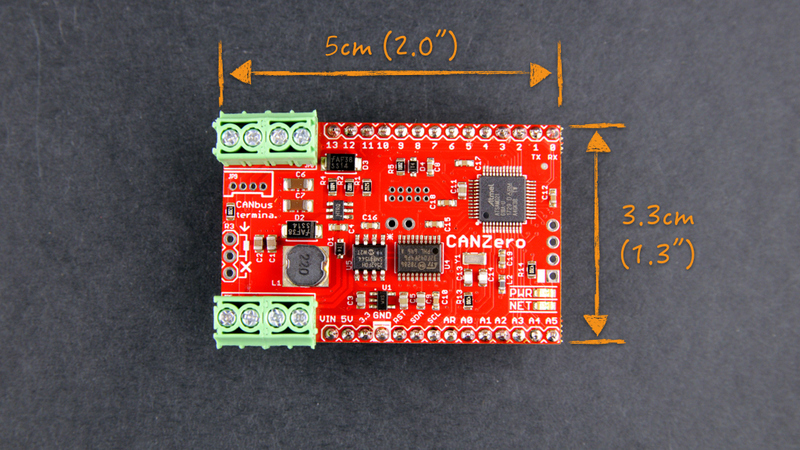 The "PiMaster" HAT (shield) connects to a RaspberryPi and a 12V to 24V power source. It has three roles: